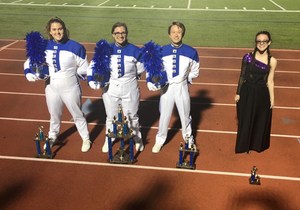 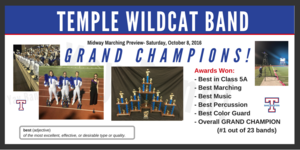 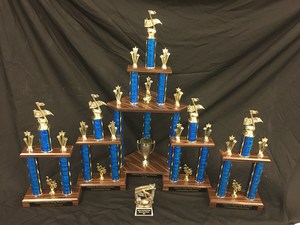 The Temple High School Wildcat Band was named Grand Champion, along with five other awards at the 2016 Midway Marching Preview Competition.
Call it a banner day for the Temple High School Wildcat Band on Saturday, October 8 at Midway High School in Hewitt.
The Wildcat Band competed against 22 other bands at the Midway Marching Preview Competition with their 2016 show "Broadcast".
The Wildcat Band was named Overall Grand Champion, Best in Class 5A, Best Marching, Best Music, Best Percussion, and Best Color Guard.
If you haven't seen the Wildcat Band show "Broadcast", make sure you catch it during halftime of a Wildcat Football game, or during an upcoming competition.
Our Wildcat Band students do a fantastic job executing this diverse performance.
It is not one to be missed.